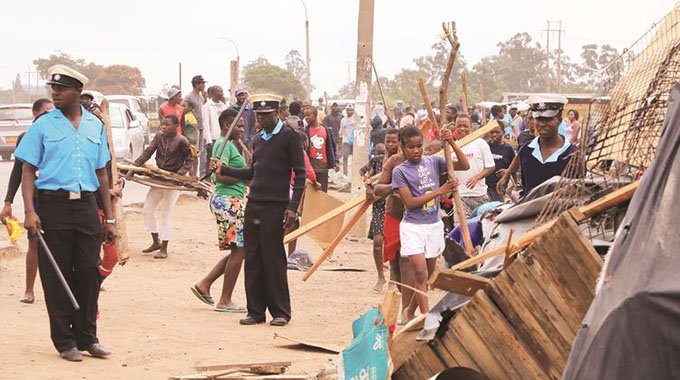 The Harare City Council (HCC) has ordered all illegal tuck-shop owners across the City of Harare to cease all operations before the 18th of February 2021.

The HCC also said the illegal tuck-shop owners should eradicate all their structures before the announced date.

Council highlighted that an operation to destroy all the illegal structures will begin on the 18th of February.

According to the authorities, illegal structures are in contrary with the Regional, Town and Country Planning Act which stipulates that unplanned vending stalls and tuck-shops are prohibited.

This development was revealed today (Tuesday) by the Harare City Council, through a public statement issued on their official twitter handle.

“The City of Harare will commence demolition of tuck-shops and vending stalls in Mbare on Thursday 18 February 2021 but the operation is not exclusive to Mbare only.

“City of Harare notes with great concern the re-emergence of illegal vending stalls, tuck-shops on public spaces (road verges and public space) and on residential stands within Harare’s confines which is contravention of section 24 of the Regional, Town and Country Planning Act.

“For the avoidance of doubt tuck-shops remain prohibited and any person operating their tuck-shops whether within their residential stand, on public open space or road verge is doing so illegal.

“All illegal tuck-shop owners across town should stop operations, demolish their structures and restore land to its intended and designated use,” reads the statement.

Apart from the illegal tuck-shop demolition across the capital city, thousands of residents are on the verge of forced eviction as authorities embarked on an operation to demolish all illegal houses in the capital.

High density suburbs such as Budiriro, Epworth, Glen Norah and Chitungwiza were the most affected areas.

The demolitions bring forth memories of the 2005 Operation Murambatsvina an urban clean up campaign which left nearly 700,000 people across the country homeless.

Director for the Vendors Initiative for Social and Economic Transformation (VISET), Samuel Wadzai said the authorities must not use Covid-19 pandemic as a scapegoat to infringe the rights of citizens.

“The authorities must stop taking advantage of the COVID-19 situation and the lock-down to trample upon the rights of citizens.

“Why are these demolitions happening at a time when millions are struggling to survive and put food on the table?

“Why are these demolitions being done without an alternative in place for us the majority who are struggling to make ends meet?

He also added that as VISET they denounce and challenge these demolitions.

“We condemn these demolitions not only because they defy all logic but also because they are illegal and a direct attack on the constitution and our rights as Informal Traders,” he said.

Kombayi Bounces Back As Gweru Mayor

Mugabe’s daughter, husband got 20 hectares of...