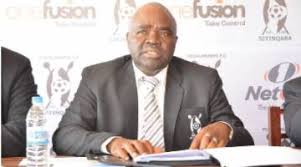 De Jongh posted this on his Facebook page recently.”Much respect for this great leader. The right chairman for Bosso,” the Dutch wrote as a caption on his timeline, attaching Mhlophe’s photo to it.

The Dutch coach had a six month marriage with Bosso   before joining cash rich FC Platinum.

For Amahlolanyama (Highlanders FC) as they are known in the domestic football fratenity, De Jongh brought home the Chibuku Super Cup giving the Bulawayo giants a first major silverware since the Mbada Diamond trophy in 2013.

However, the coach crossed town to Zvishavane where he joined money bags (FC Platinum) before the two parted ways in November.

Platinum sacked De Jongh, after they learnt that CAF wrote to ZIFA who are the country’ football board that the 50-year old coach was not capacitated to seat on the bench because he is not a holder of a CAF A coaching license.

The Chibuku Super Cup winner (De Jongh) who calls himself ‘The Champ’ on his various accounts on social media is currently unattached to any club.

Williams ruled out of first Test against...