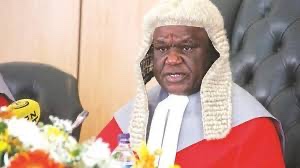 Zimbabwe has engaged the services of the Head of the Anti-Corruption Division of the High Court of Uganda, Honourable Justice Lawrence Gidudu in their quest to curb corruption in the country.

The top-notch Ugandan Anti-Corruption Court judge is set to train Zimbabwe’s judiciary, ahead of the establishment of the new anti-corruption courts.

Justice Lawrence Gidudu has been the Head of Uganda’s Anti-Corruption Court for the past five years .

The week-long training which began today was attended by judges, magistrates, prosecutors, anti-corruption investigators and police officers, among other stakeholders.

Justice Luke Malaba during the official opening of the Anti-Corruption Training said Uganda had waged war against corruption through its specialised anti-corruption courts over the last 10 years building up a wealth of experience in the field.

Said Chief Justice Malaba: “After noting the strides that other jurisdictions have taken in setting up similar courts, I made contact with my counterpart, the Honourable Chief Justice of Uganda, to seek assistance in the professional development of local judicial officers.

“Uganda has been running specialised anti-corruption courts for the last 10 years. They have, as a jurisdiction, done exceptionally well in the adjudication of corruption related cases.

“I am positive that our judicial officers and other institutions involved in the fight against corruption will have a lot of lessons to draw from Uganda’s experiences.

“A judge in charge of the Uganda anti-corruption courts will be coming to Zimbabwe before the end of this month to share Uganda’s experiences with judges and magistrates.”

Speaking during the official opening of the week long training Prosecutor General, Mr Kumbirai Hodzi said that the fight against graft requires all stakeholders to put hands on deck .

“Justice Gidudu of Uganda will conduct the training which will not be limited to our judges and magistrates only.

“So (today) we will have the opening ceremony where we will have opening remarks from various heads of institutions,” said Mr Nkiwane.

The JSC has since made a decision to establish specialised anti-corruption courts at a higher level as part of measures to complement the Government’s call for all institutions to join hands in the corruption fight.

Presently, courtrooms for the anti-graft crusade are under renovation and judges have been appointed in Harare and Bulawayo.