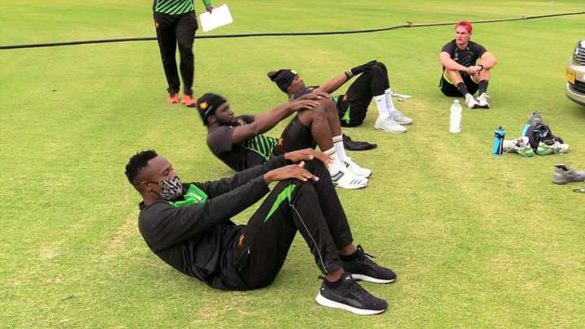 The Zimbabwe cricket team, Chevrons have officially started training after all of them tested negative for Covid-19.

The team is said to be training for the potential tour of Afghanistan to Zimbabwe in August.

In a statement, Zimbabwe Cricket (ZC), hinted on this development saying that the official training started on Monday, June 15.

ZC said, “Results from last week’s coronavirus tests on Zimbabwe players andcoaching staff have all returned as negative, giving the entire squad called up for training the green light to get down to business. With Zimbabwe planning to host Afghanistan in July-August, subject to government approval, a training squad of 37 that was called up to start preparing for the potential tour had to first undergo COVID-19 tests as part of Zimbabwe Cricket (ZC)’s efforts to guarantee the health of players and staff members as well as to curb the spread of the respiratory disease.

“After all the players, as well as the coaching staff, got the all-clear, training officially started on Monday. Due to national lockdown restrictions and also to ensure social distancing is strictly observed, the training squad is split into small zonal groups that are practising within their own provinces.”

Provincial coaches and some national team coaches will be taking charge of these training sessions.

“Bulawayo-based players got the ball rolling on Monday with a fitness test that was overseen by provincial coach Njabulo Ncube at Queens SportsClub. On the same day, national fielding coach Shepherd Makunura took Tendai Chisoro through his paces at Masvingo Sports Club Harare has the largest number of players who have been split into two groups, with 14 of them training at Harare Sports Club and 11 at Takashinga Cricket Club under the national team coaching staff of fitness trainer Walter Karimanzira, batting coach Stuart Matsikenyeri and bowling coach Douglas Hondo.

“The Takashinga-based players held their fitness test this Tuesday morning, with the Harare Sports Club group following suit in the afternoon. In Manicaland, provincial coach Farai Chari is in charge, while national women’s team coach Adam Chifo is taking care of the Midlands players. After undergoing strength and conditioning sessions for the first three weeks, the players will then begin focusing on cricket-specific skills training,” said ZC.

ZC has also put in place other preventive and containment measures that will be strictly observed to ensure that the risks associated with the cricket environment field of play, training venue, changing rooms, equipment and management of the ball have been mitigated.

Although the players are now officially training in groups, they had been given some home training sessions to follow.

Give us salaries we were earning before (SI) 142: Gvt told