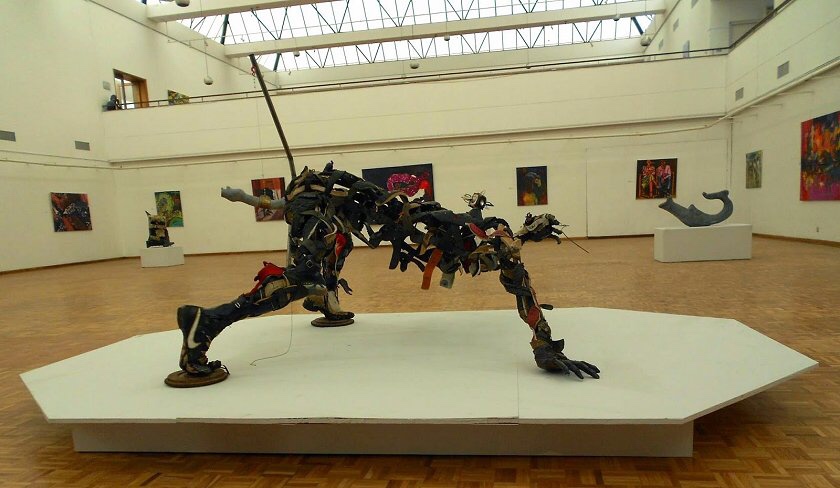 Most visual artists dream to have their work exhibited. This is what has made such places as the National Gallery of Zimbabwe, Delta Gallery and First Floor Gallery popular. For Tsungai “Walt” Magwade the road has been bumpy.

The 25 year old artist hasn’t had it easy since he turned professional and has decided to pile his paintings until he gets the right offers.

“Due to the economy and some of the daily struggles we face in Zimbabwe, it is difficult to make a living out of art especially when you are virtually unknown. I have made many pieces and tried to sell them on my own but the people who wanted to buy were short changing me so I decided not to sell,” said Walt.

Asked on whether he has exhibited before the painter expressed dissatisfaction over some shady dealings which made him loose interest in exhibiting.

“I once exhibited at a popular gallery. My piece was pegged at US$2 700 and I was told that there was a bidder. After the exhibition some people from the same gallery came to me and offered to give me $700 as they claimed that the potential buyer had gone. I knew that something was not right. I packed my baggage and went home. I smelt lack of professionalism and I am yet to exhibit again,” he narrated.

Walt has been doing portraits and pencil work for survival. He did a portrait of Temba Mliswa which he presented to the legislator in 2017.

“I have been doing portraits and the most popular one is the Temba Mliswa picture which I did in 2017. I have many portraits in the studio; some are done while some are to be finished. The beauty of staying at the studio lies on the fulfillment of teaching school kids and young adults the basics of art. Portraits are easy to sell and many people want their faces done on paper as pencil art,” said Walt.

This reporter visited Walt’s studio in Norton where beautiful paintings and portraits are hung. The most phenomenal paintings in his studio are Concrete Jungle which depicts Harare’s First Street, Holyvil which is a commentary on today’s church and Bread Winner.

He also does art with waste. There is an interesting piece titled D.E.A.D which he made from an animal skull, stubs of cigarettes and empty bottles of Bronclear (Cough Cyrup). The piece speaks about the drug scourge in the country’s high density areas.

Walt volunteers at Dudley Hall Primary school as an art mentor. He also teaches at his studio and is a private tutor. His journey continues as he vowed to never stop working even if his art is not sold.

Young Zimbabwean Footballers off to Barcelona for trials

Inscor Holdings to down tools over an array of grievances