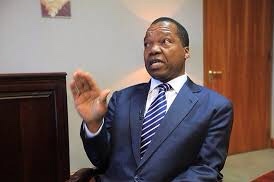 Following the introduction of new ZW$10 note , the economic situation seems to continue on a downward spiral with RBZ governor, John Mangudya blaming demons for the economy’s collapse.

Speaking in Parliament recently, Mangudya said that he does not know the causes behind the dying Zimbabwe economy.

Writing on his Twitter page Biti said, “With the US$ now trading above 65 on the pararell market it is time the regime accepted the failure beyond any shadow of doubt of its monetary & exchange rate policies . We have constantly argued that you can rig everything else but not the economy. An urgent reset is required”

The former Finance Minister said the government should urgently implement measures to save the economy after the value on the local currency to the US dollar has nosedived on the parallel market.

Biti says the government, should, among other things, immediately dollarise, scrap export surrender requirements, and revert back to cash budgeting and fiscal consolidation.

“The regime must immediately dollarise through the repeal of Finance Act No 2 of 2019 as well as Scrap export surrender requirements.
Revert back to cash budgeting and fiscal consolidation.
Deal with corruption urgently particularly breaking the Sakunda/Trafigura /Command Agriculture axis.Provide an Urgent Fiscal Plan with international backing. Normalise and demobilize infrastructure of repression
More importantly, there must be an urgent political solution”

“This clown is Zimbabwe’s central bank Governor! Together with Mnangagwa & the other CORRUPT hangers on, they have destroyed this country! Instead of talking about economics, he talks about demons! Prices are being pegged at 70 to the USD bcoz of these morons! They MUST ALL GO NOW,” he said.

There Is No Need For The Drama and Confusion In The MDC’s wars.