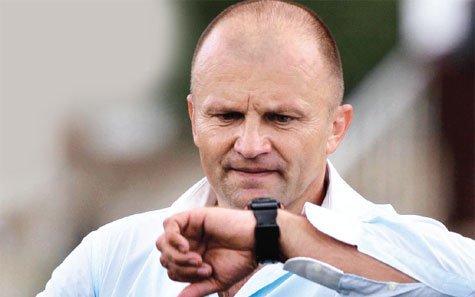 
Facing a daunting task of overturning a  3-1 loss at the hands of the the Desert Foxes in Alger’s, Warriors coach, Zdravko Logarusic, has reviewed that he is worried at playing in an empty National Sports Stadium .

Zimbabwe Senior National team will play second leg of their AFCON qualifier match against the Foxes of Algeria at National Sport Stadium (NSS) in an empty stadium on Monday due to the World Health Organization (WHO) Covid-19 protocols, that condemn the gathering of fans in a stadium, in order to curb spread of the pandemic.

Logarusic reiterated that the outbreak of Covid-19 pandemic brought a new norm in the football fraternity across the world.

The Crot added that playing in an empty stadium will disadvantage the Warriors particularly as the hosts. He (Loga) further stated that fans play a crucial part in football, their singing, cheering and support they bring to the stadium contribute to a positive result.

“Covid-19 gave us an unexpected situation in the football fraternity, all over the world. The situation is forcing teams to play in empty stadiums without their fans, we are playing Algeria in a few days, to us the home team its an disadvantage to play in an empty stadium.

“Supporters can lift the momentum and the level of the game, they can determine the final result, if a team is losing fans can cheer up until the team wins,” said Logarusic.

The former Sudanese and Go Mahia coach also described his displeasure to play such a very big match without the presence of the Zim football fans.

“It was going to be a pleasure to play under Zimbabwe’s football fans, I have never played under them and this is something I am going go to miss in that game,” he described.

However, the 54-year old gaffer vowed that even without fans his troops will show competence and hard work to pick up a good result after loosing 3-1 in their first encounter with the African champions.

“Its going to be a hard game without fans, it will be like we are playing in a theater though we will adopt and challenge our opponents to produce a good result after our 3-1 loss away,” coach Zdravko said.

Presently, Logarusic has only seat twice on the bench for the Warriors, that was in  a nil all draw friendly match played against the Flames of Malawi their at Mpira stadium in Malawi and their 3-1 loss to Algeria.

The Ministry Of Sports, through the SRC and local football mother body ZIFA will be responsible for all the stipulated WHO Covid-19 protocols shall be observed.

Is karma catching up with Chiyangwa?