Desperate attempts to soil the reputation of alternative online multi-media platforms have reached alarming levels with unsubstantiated claims stating that Bustop TV and other media houses got millions of dollars from the United States embassy in an effort to drive their political narrative.

This follows a series of reports from state inclined institutions and individuals insinuating that the money is meant to fund a program dubbed “Its corruption not sanctions”.

Social media as well as state media have previously carried articles claiming that a whooping US$1.7million has been channelled towards the organisation so as to drive the US agenda.

The latest tweet by Reason Wafawarova who wrote; “Bustop TV got $1.7million of the $5 million released by the US Embassy to fund a program dubbed “Its corruption Not sanctions”, leaves a lot to be desired.

Contacted for comment, a representative from the Bustop TV made it clear that they have not received money from any funders with an agenda of driving a particular political narrative and they are not expecting anything of that nature.

“It’s surprising that people see us as a regime change organisation, No. Let me categorically put things straight here, we have not received any money particulary from the US embassy for purposes of narrating an anti government political discourse . We are just a multimedia media house like any other. We have guidelines in which we operate in as a media house, not bent on pushing anyone’s agenda,” said the representative.

Bustop TV remains obliged to use its multi-media approach of skits, TV series, news publication, documentaries and TV programs to narrate the Zimbabwean story objectively without any bias, fear or favour. 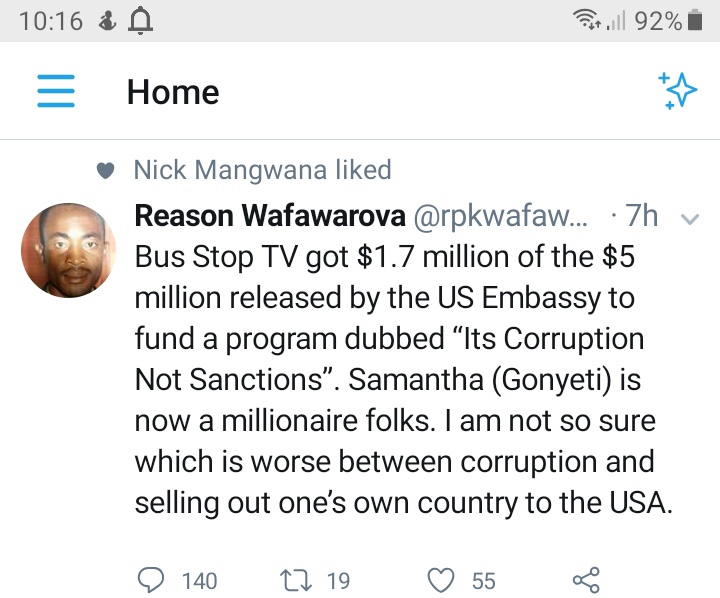