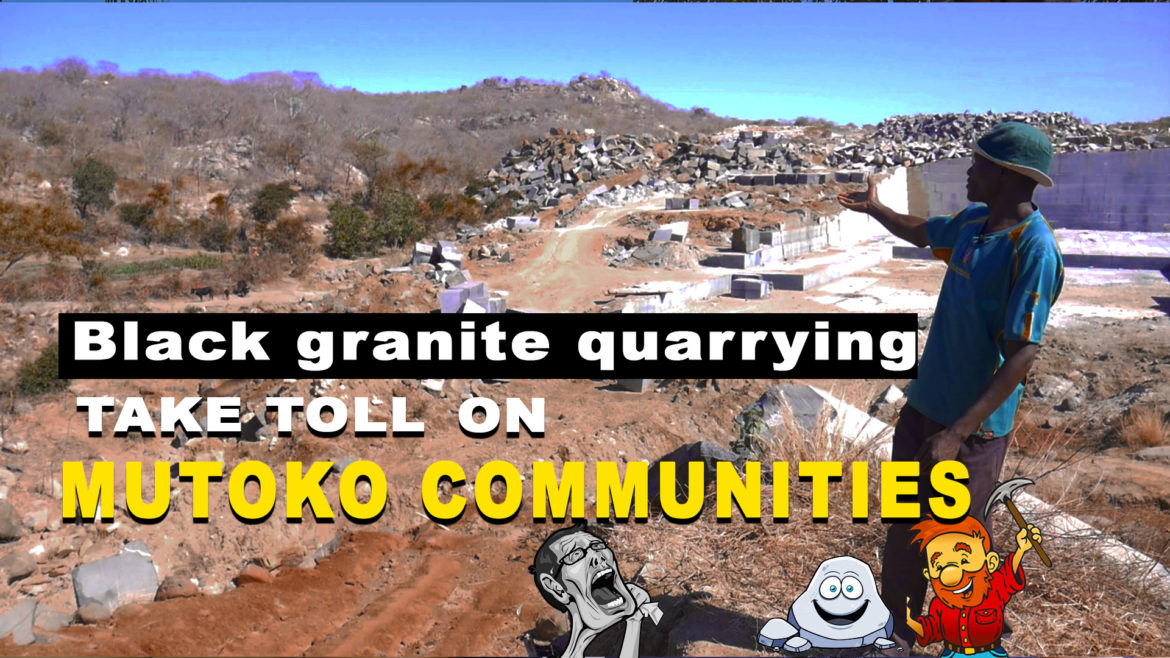 Recently in Mutoko – Driving from Harare to Nyamapanda boarder post, midway in Mutoko, haulage trucks carrying raw black granite stones are a near constant sight with trucks going either back to Harare or further towards Mozambique.

These huge precious stones are shipped to various international market destinations especially Europe and North America where they are cut, polished and used to make furniture and construct state of the art buildings.

For a first timer, the general impression is that an industrious community such as (Mutoko) has community involvement in the extraction of these stones which locals termed “black diamond” but alas, the locals have a far much different tale altogether.

Over the years he has witnessed these hills being reduced to sliced blocks and carried away as time and again foreign investors come with even more sophisticated machineries.

Every day, he watches in agony haulage trucks cutting across the dusty roads of his village loaded with the precious stone leaving a trail of destruction not only to the road infrastructure but also to his two bedroomed flat and a hut in which he resides with his wife and grand-children which develop cracks.

Villagers say environmental degradation is perennial in Mutoko as the foreign owned mines are operating without the required Environment Impact Assessment (EIA) licenses.

According to Environmental Management Authority (EMA), an EIA is a process which identifies the environmental impacts of a development and clearly outlines measures to mitigate the negative impact caused during project construction, implementation and decommissioning.

“It is an evaluation of a project to determine its impact on the environment and human health and to set out the required environmental monitoring and management procedures and plans,” the Environmental Management Act reads.

However, the community members say they are not consulted during and after the whole process, which opens it up for manipulation between EMA, miners and a few individuals claiming to represent the communities.

Farai Maguwu, Director of Centre for Natural Resource Governance a non-governmental organization defending rights of communities affected by extractive industries bemoaned the paltry revenue that is being forwarded to Mutoko Rural District Council as an impediment to the development of the district.

He blamed the government for allowing exploitation of the country’s natural resources under their watch.

“During the US Dollar era the mining companies used to pay $1 per ton. Since the government announced that we have gone back to RTGS$ they (companies) are paying Mutoko Rural District Council an equivalent US$1 per ton meaning they are getting something between plus or minus 70RTGS$. What I would want to say is that there is no sane government under the sun that can allow such super exploitation by a foreign company of its own resources. This is why Mutoko has been stagnant in terms of development whilst being devastated by the impacts of black granite mining on its environment.

“When these companies take this black granite out of Zimbabwe and they polish it, they sell it for more than USD$900 per ton. So here they leave absolutely peanuts for the Mutoko RDC causing social conflicts between the local council and people as people will be demanding more whilst the local authority has nothing in its coffers and we wonder where we are going as a country when we allow such super exploitation under our watch,” said Maguwu.

The Mines and Minerals Act have been blamed for this disregard of cultural rights and practices of locals as it supercedes the customary laws thereby undermining the authority of local Chiefs who are the custodians of the precious resources and have the best interests of the people at heart.

Maguwu also added that there is need to re-amend the Mines and Minerals Act as it is a colonial law that was inherited to serve the interests of the outsider at the expense of local people.

“The Mines and Minerals Act definitely need to be amended or to be repelled altogether and we come up with a new mining law. This is a 1961 Act which was put in place 19 years before we got our independence and you don’t need a rocket scientist to tell you that it was designed to protect the large scale British corporations and not the locals. What we need is a new mining law which brings the community aspect in to the mining equation.

“There is need for devolution of decision making when it comes to mining. In most cases like right now we have hundreds of Chinese arriving every month. Once they have paid the corruption fee in Harare they are then deployed in the communities where some of them end up assaulting our Chiefs and all sorts of environmental, labor and direct human rights violations are perpetrated. In order to stop that, we need to devolve mineral governance to the local level whereby mining is part of the master plan for development of that particular area.  The traditional leaders, local councilors, local MPs Civil Society must be consulted”, he added.

Kudakwashe Makanda, programs officer for Youth Initiative for Community Development (YICD) an organization that works towards development of vulnerable commuties in Mashonaland East Province blamed the centralized revenue collection as an impediment to Mutoko’s development since black granite was listed as a mineral in 1996.

“Initially before this rock was classified as a mineral, all the revenue were being taken by the local authority which saw the building of Mutoko High School, Mutoko Council offices,  a Vocational Training Centre amongst other visible infrastructural development in the district. But then when it got to be classified as a mineral, most of the proceeds are now being taken to the central treasury,” he said.

The Zimbabwe Environmental Lawyers Association (ZELA) in it’s report in 2018 revealed that companies exporting black granite are making fortunes but were not willing to remit some money for developmental purposes of the area.

For Rambidzai Nyabote, the development of his Village with proceeds from the “black diamond” remains his hope and wish even though the situation on the ground is not encouraging.